We Don’t Eat Our Classmates

We Don't Eat Our Classmates 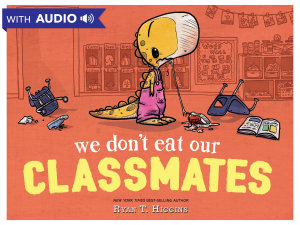 GET BOOK
We Don't Eat Our Classmates Book Review:

It's the first day of school for Penelope Rex, and she can't wait to meet her classmates. But it's hard to make human friends when they're so darn delicious! That is, until Penelope gets a taste of her own medicine and finds she may not be at the top of the food chain after all. . . . Readers will gobble up this hilarious new story from award-winning author-illustrator Ryan T. Higgins.

We Will Rock Our Classmates 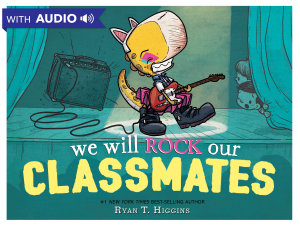 GET BOOK
We Will Rock Our Classmates Book Review:

Read along! Readers will twist and shout for this headbanging companion to the #1 New York Times best-selling We Don't Eat Our Classmates.Penelope is a T. rex, and she's very good at it. She also likes to rock out on guitar! With the school talent show coming up, Penelope can't wait to perform for her classmates. But sharing who you are can be show-stoppingly scary, especially when it's not what people expect. Will Penelope get by with a little help from her friends? 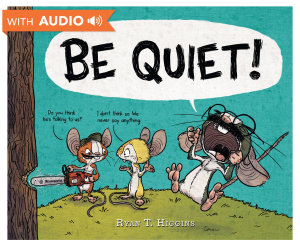 GET BOOK
BE QUIET! Book Review: 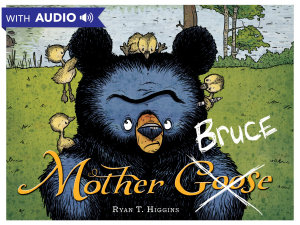 Bruce the bear likes to keep to himself. That, and eat eggs. But when his hard-boiled goose eggs turn out to be real, live goslings, he starts to lose his appetite. And even worse, the goslings are convinced he's their mother. Bruce tries to get the geese to go south, but he can't seem to rid himself of his new companions. What's a bear to do?

How I Became a Pirate 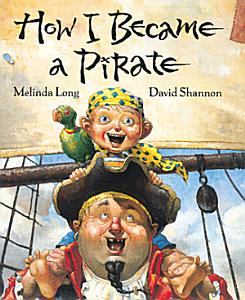 GET BOOK
How I Became a Pirate Book Review:

Jeremy Jacob joins Braid Beard and his pirate crew and finds out about pirate language, pirate manners, and other aspects of their life. 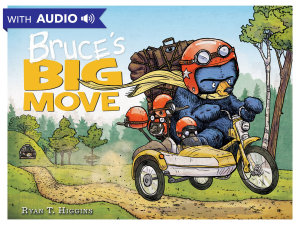 After the events of Hotel Bruce, our favorite curmudgeonly bear shares his home with not only his four geese, but three rowdy mice besides! Fed up with their shenanigans, Bruce sets off to find a rodent-free household. But as usual, nothing goes quite according to plan. . . A hilarious sequel for fans of the previous Bruce books, as well as a standalone discovery for new readers, Bruce's next reluctant adventure is sure to keep kids giggling. 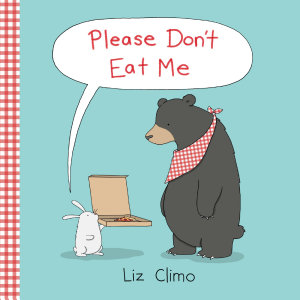 Beloved author-illustrator Liz Climo is back with a hilarious take on (reluctant) friendship that will appeal to fans of We Don't Eat Our Classmates and I Want My Hat Back! When a carefree bunny is approached by a voracious bear in the woods, Bunny has just one request: "Please don't eat me." But the bear has a never-ending list of requests, and Bunny realizes maybe Bear isn't as hungry as he'd let on...maybe he just wants his new friend's company for a while. This witty and poignant exploration of predator and prey will have children and parents alike roaring with laughter--and looking for their next meal. 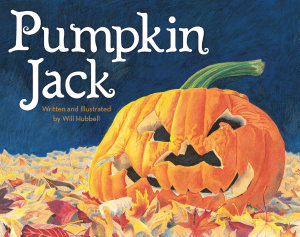 The first pumpkin Tim ever carved was fierce and funny, and he named it Jack. When Halloween was over and the pumpkin was beginning to rot, Tim set it out in the garden and throughout the weeks he watched it change.

Bruce's home is already a full house. But when a big storm brings all his woodland neighbors knocking, he'll have to open his door to a crowd of animals in need of shelter-whether he likes it or not. Readers will love this next installment of the uproarious, award-winning Mother Bruce series.

We Don't Eat Our Classmates! 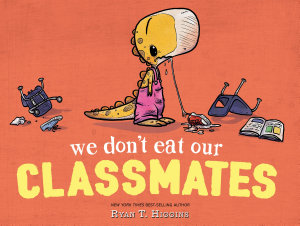 GET BOOK
We Don't Eat Our Classmates! Book Review:

It's the first day of school for Penelope Rex, and she can't wait to meet her classmates. But it's hard to make human friends when they're so darn delicious! That is, until Penelope gets a taste of her own medicine and finds she may not be at the top of the food chain after all. . . . Readers will gobble up this hilarious new story from award-winning author-illustrator Ryan T. Higgins.

As Thanksgiving Day approaches, Turkey nervously makes a series of costumes, disguising himself as other farm animals in hopes that he can avoid being served as Thanksgiving dinner.

A reluctant mother to four young geese, grumpy Bruce the bear loses his temper when he migrates home in the spring only to discover that mice have converted his den into a hotel.

Library Books Are Not for Eating! 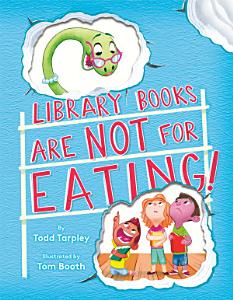 GET BOOK
Library Books Are Not for Eating! Book Review:

A funny picture book about books...and eating them! Perfect for fans of We Don't Eat Our Classmates. It's time for school, but Ms. Bronte has one small problem...she really loves eating books. (Did I mention she's also a dinosaur?) Math books, cookbooks, old books, new books--she just can't help herself. Will Ms. Bronte ever be able to curb her page-turning appetite, or will she continue chomping her way through a tasty book buffet? Open the fun peek-through cover of this lively picture book, and get ready for a story that will leave readers hungry for a second helping!

Meet the little shark with a big appetite for school! It's Sammy the shark's first day at school and he's very excited. But when Sammy gets excited, he goes CRUNCH! Sometimes he nibbles his paintings, or chomps on the class story book, but when Sammy's excitement gets the better of him, the teacher is in for a big surprise! 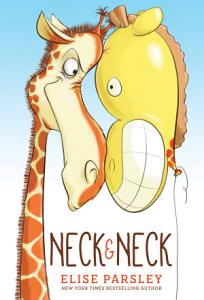 In this crowd-pleasing read-aloud from the creator of the bestselling If You Ever Want to Bring an Alligator to School, Don't!, a giraffe's self-esteem is tested during a hilarious confrontation between unlikely look-alikes! Everybody loves Leopold the giraffe. He inspires awe and wonder. His adoring fans gaze and cheer. Best of all, they feed him lots of deeeelicious snacks! But, one day, a shiny, bobble-headed new rival comes in and ruins everything...a giraffe-shaped balloon! Just how far will Leopold go to prove that he's the hero of the zoo? Readers learn that actions speak far louder than looks in this laugh-out-loud face-off from Elise Parsley--the New York Times bestselling creator of the Magnolia Says DON'T! series. 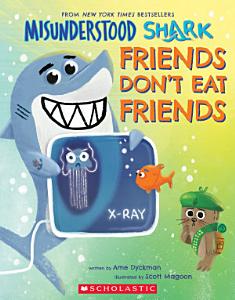 In this new Misunderstood Shark story from New York Times bestselling duo Ame Dyckman and Scott Magoon, Shark dares to ask the question: Can friends eat friends (and get away with it)? 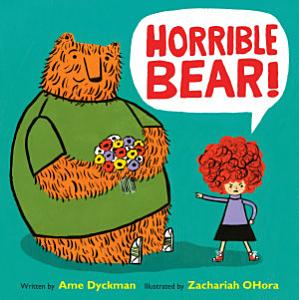 The New York Times-bestselling duo behind Wolfie the Bunny presents a hilarious read-aloud about accidents, outbursts, manners...and the power of saying "I'm sorry." Bear didn't mean to break a little girl's kite, but she's upset anyway--upset enough to shout "HORRIBLE BEAR!" Bear can't believe it. He's not horrible! But now he's upset, too--upset enough to come up with a truly Horrible Bear idea. In this charming but goofy picture book, readers will learn all about tempers, forgiveness, and friendship as Bear prepares to live up to his formerly undeserved reputation while the little girl realizes that maybe--just maybe--Bear isn't as horrible as she thought. 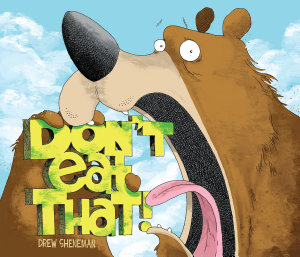 A perfect summer read-aloud from the author-illustrator who brought you, NOPE! Bear is hungry. Gertie wants to help. But finding the perfect snack is harder than it looks. Will Gertie and Bear silence Bear's tummy grumbles before hunger gets the best of them? Expressive characters and funny dialogue lead the way in this pitch-perfect story about patience and teamwork, by nationally-syndicated cartoonist Drew Sheneman.

Bruce's goslings want to play with him. But where could that bear be? This original board book in the best-selling Mother Bruce series will delight young fans of seek-and-find activities as they hunt for Bruce on every spread. Just right for our littlest readers, this book is sure to bring a smile to even the grumpiest face.

The Absolutely True Diary of a Part-Time Indian 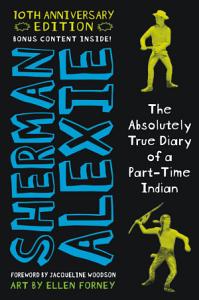 GET BOOK
The Absolutely True Diary of a Part-Time Indian Book Review:

Bestselling author Sherman Alexie tells the story of Junior, a budding cartoonist growing up on the Spokane Indian Reservation. Determined to take his future into his own hands, Junior leaves his troubled school on the rez to attend an all-white farm town high school where the only other Indian is the school mascot. Heartbreaking, funny, and beautifully written, The Absolutely True Diary of a Part-Time Indian, which is based on the author's own experiences, coupled with poignant drawings by Ellen Forney that reflect the character's art, chronicles the contemporary adolescence of one Native American boy as he attempts to break away from the life he was destined to live. With a forward by Markus Zusak, interviews with Sherman Alexie and Ellen Forney, and four-color interior art throughout, this edition is perfect for fans and collectors alike.